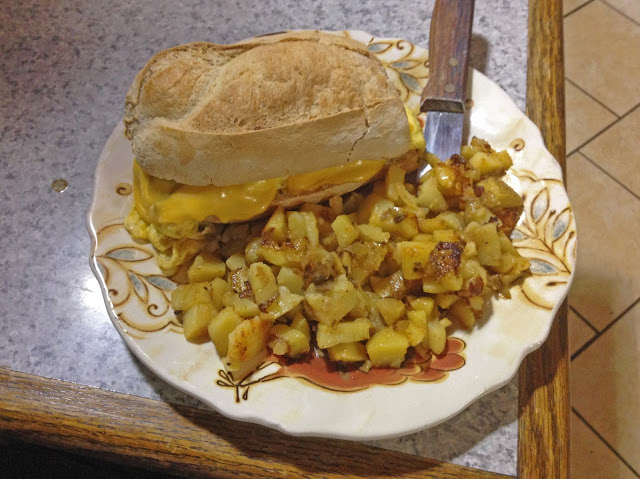 I had to run an errand to Spencerport last Sunday and as I was leaving town I realized I was hungry. "Siri, nearest diner." She then told me that the Lighthouse Diner was just three quarters of a mile down the road on the left. So I drove, and then I drove, and then I was in Ogden, so then I had her give me directions. After doing a large circle to see new homes in former fields, I got to the intersection of 31 and S. Union. I drove into the plaza and saw what might have been a diner but what was now Rancho Viejo. I turned the corner to check out the south side of the plaza and continued to see no breakfast. As I reached the end of the storefronts I started to turn around but leaning next to the building was a sandwich board with a breakfast special on it; I looked up to see Mangia Mangia. The front door was open so I figured I'd go investigate.

Right at the front door was a pastry case with loaves of fresh baked Italian bread sitting on top. This was a good sign. I took a seat at a small table in the back and looked over the menu. With Italian bread French toast, frittatas, and six varieties of eggs Benedict, Mangia Mangia is not for the light eater. I found their breakfast sandwich which is two scrambled eggs, cheese, and your choice of bacon, ham, Italian sausage or steak on either a giant English muffin or an Italian roll and after seeing the loaves at the front door, I went for the roll and my usual bacon and American cheese. The sandwich comes with home fries and they charge $6.99 for the combo.

This is a curious place: An Italian restaurant in the back of a suburban plaza open for breakfast with both Red Hot and Sriracha on every table. The kitchen is separated from the dining area by a free standing wall so the smells and noises from the kitchen mingle with the classic rock playing throughout the restaurant. Casual, suburban, pleasant enough.

A few moments later my breakfast arrived. I wish I had put a fork or a quarter in the photo for scale just to impress how large it all was: The sandwich wasn't on a roll but a mini loaf of bread and there was probably a pound of home fries on the plate! I wasn't quite prepared to bite into the loaf of sandwich so I scooped up some potatoes and was greeted with a couple of unexpected flavors. The Yukon Gold potatoes were much sweeter and creamier than most diner home fries and that first bite had a distinct taste of margarine. I did not care for these at all. I tried them with Red Hot and then Sriracha, and then with ketchup, and then with ketchup and the two hot sauces. None of these variations made me like them any better. I moved onto the sandwich. I'll spare you the details of how big my bites were and how many it took to finish this blimp, but I will tell you that the roll had a nice crunch to the crust and good resistance when bitten. However, this may have been too much of a good thing. Did I mention how big this roll was? Unfortunately, the scrambled eggs, cheese, and strips of bacon down the center, got lost amongst all the bread. Honestly, I barely remember the bacon and cheese, only the amount of chewing I had to do. If they could do some proportion control and ditch the margarine, this would be a worthwhile breakfast.