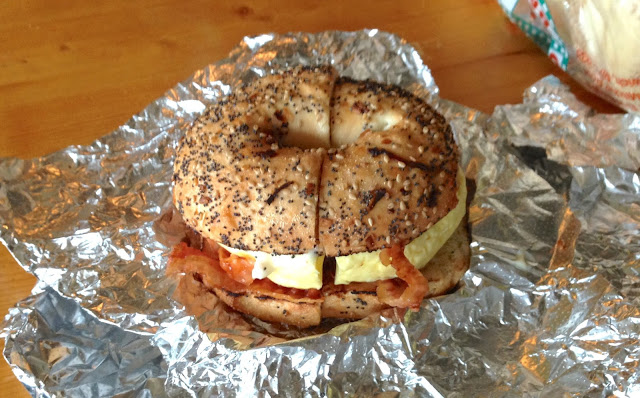 On an overcast morning I headed south from our rental to try a sandwich and bring some bagels back for the kids. A quick few turns off Ocean Boulevard and I spotted the building I saw online and found a spot down the street a bit. As I started walking towards breakfast the damp air held the smell of toast and fresh brewed coffee. I was sure I stumbled onto something good. If New Hampshire's 13 miles of Atlantic coastline can adopt an island vibe - with an active surfer culture (wet suits, naturally) and tiki bar decor for any non-seafood dedicated food/drink establishment - why couldn't they throw a little New York in there, too?

I stepped inside and immediately felt at home with the smell of toasted onion and sesame seeds amongst the surfboards and old couches. I got in line and started to think about what selection of bagels to bring back to the house but my brain froze when I looked behind the counter. The wall of bins for different varieties was there, and there were bagels in the bins, but they were already in bags. Stacked 6 high in a plastic bag like Lender's. The girl behind the counter snapped me out of it, "Sir?"
"I...  I'm confused. The bagels are in bags." She stared at me so I continued, "Soooooo, they must come from somewhere else?"
"Uh huh!" she cheerfully replied. I quickly ditched my mixed order and got a bag of sesame for the house and an egg, bacon, cheese on an everything for now. 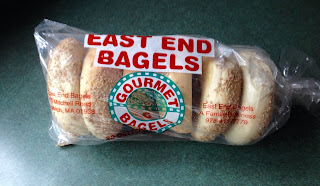 A few minutes later I got a large bun of aluminum foil, had a seat, and opened it up. This was a big sandwich: The bagel was New York sized and the scrambled egg was at least an inch tall, it smelled good so I cocked my jaw and took a bite. The bagel was soft and the egg was hotter than Beelzabub! I took a moment to let the egg cool down and to assess things. The heat of the eggs suggested microwave, and the sheer size of them skewed the bacon and cheese ratios which made the inside of the sandwich kind of a bust. The other sad realization is that this was a breadel - more bread than bagel, but at least they got the everything toppings right. Same held true for the bag of sesame bagels I brought back to the house: looked good, smelled good, but ultimately just a big ring of dough. These are gourmet in the same way a tricked out Civic is a Formula 1 race car. Hey, at least I tried.