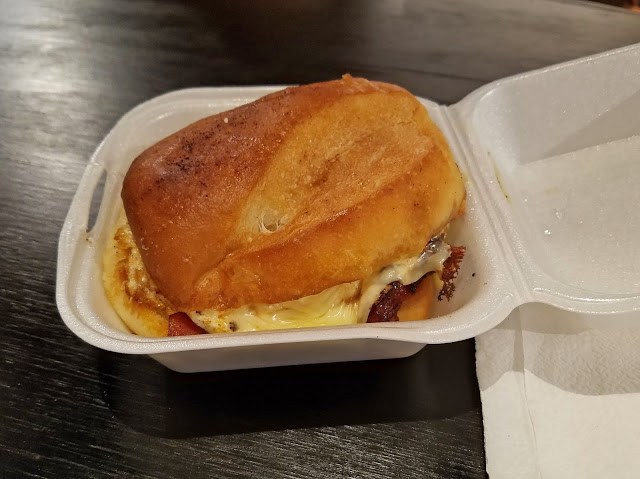 I had made plans to go to the Market with our Artist In Resident T. Foley for her last croissant in Rochester, but I had to bail at the last minute to meet the furnace repair man; Apparently, 30 years is pushing it for a gas furnace. I got to work around 11 and as I walked up the stairs I was greeted by the warm and comforting smells of breakfast. A welcome change from my cold house this morning.

When I got to my office door I saw the plastic bag hanging from the handle. BREAKFAST WAS WAITING FOR ME! I quickly made my way to my desk and opened up the bag and styrofoam container and was greeted by a hearty looking egg sandwich. I dove in while it was still holding on to the heat of the grill and it was fantastic! The fried egg and American cheese were melded together, the plentiful bacon was thick, salty and flavorful, and the roll was...an honest to goodness roll. Firm but supple, supportive but not unyielding. We should all have this in our lives. A few more frantic bites and it was gone.

I walked over to the studio and found Teresa (the aforementioned T.) to thank her for bringing back the sandwich after I cancelled on her. Our plan was to go to Flour City Bread Company to get her last croissant in town, but that's not where the sandwich came from. "Eh, they didn't have a sign and I didn't feel like asking so I went down to Union Street." She asked about the breakfast sandwich options which turned out to be either ham or bacon. "What's good today?"
"They're both good!"
"Chef's choice then!"
The guy behind the counter chose bacon and, as I mentioned, it was good.

I swear I tried the sandwich at Union Street early on in this venture and was sorely disappointed that the bread was a smushy hard roll so I've avoided it since, even though people have been suggesting I go there. I just assumed you were all nuts. My apologies. So, either my memory is confused or they decided to step up their egg sandwich game. Either way, I'd happily revisit this sandwich.