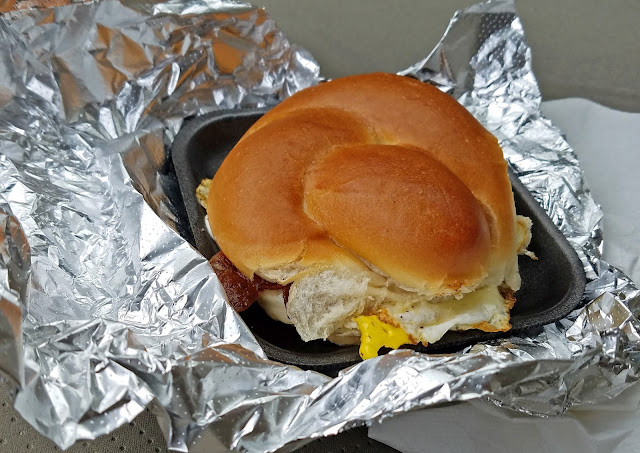 If you've been wondering if I've given up egg sandwiches we probably don't know each other in the real world. I certainly didn't give them up (though I may have been eating fewer in an effort not to get gigantic), but was too preoccupied with all the calamity of the past year to focus on much of anything else. With our new regime in place the need for comfort food is at an all time high. The search for the perfect egg sandwich resumes.

Past Mercy High School is a cute little neighborhood that I cut through to get to Penfield and other points east when I don't feel like getting on the highway. Last week I had to run to Home Depot and the breakfast pickings at home were slim. I've passed Sonny's many times thinking how curious it was placed in the middle of a residential block and figured this was the day I would try it.

I stepped in and stood beside and older man waiting for his food and chatting with a man at the grill. I looked up and scanned the massive menu board. It doesn't mention eggs anywhere - mostly burgers, hot dogs, pizza, and the usual sides and options that would follow. But it was just after 10 in the morning and I was pretty sure the other guy wasn't getting a cheeseburger. Noticing me, the man at the grill (presumably Sonny?) asked what I'd like. I inquired about getting a breakfast sandwich. "Sure, no problem. Want meat with that?" I did indeed and chose bacon. He went back to the grill to start mine and finish the other.

The man waiting for his sandwich and Sonny resumed their conversation about bees and plowing (separate topics) and I looked around. There were a handful of booths, a wall of beverage cases, but most notable the racks full of frisbee golf discs. Hundreds of them. Turns out, Sonny's has the largest supply of disc golf supplies in the country (according to their website). Who knew?! I drifted back towards the counter in time to hear the other customer say "It's amazing how people get their knickers in a twist!" With that he paid and headed out. A minute later my sandwich was done and Sonny brought it to the counter letting me know that egg sandwiches aren't on the menu but they serve them all day.

I got in my car and upon opening the foil bundle the air filled with the comforting smell of eggs and bacon. I snapped a photo and then dove in. I just expect the Rochester hard roll now so no disappointment to be had there, if anything, this seemed a little more firm than I remember them being. The filling was pure perfection; The egg wasn't cooked too hard and had a little run to it, but not messy, the white American cheese (there's a Trump joke in there somewhere) was very melty, creamy, and salty, and the bacon was crisp but not overdone. This was a solid sandwich but the generous shake of black pepper on the egg made it terrific.  This is exactly what I needed.