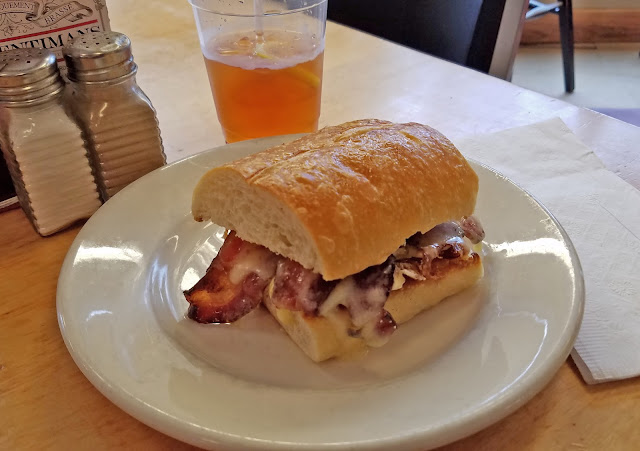 I've never been quite sure what to make of Mise en Place; When I've stopped in over the past 8 years it never seemed to be the upscale market they were going for and like the South Wedge, where they are anchored, it always promised to be up-and-coming (which is especially ironic given their name) but never seems to have arrived. Admittedly, Mise en Place has certainly made it to a respectable, upscale corner store.

Last week I was taking a tour of "gourmet" Rochester establishments and after sampling many sweets on South Ave we made our way to Mise en Place for lunch. I noticed they had a $3.50 breakfast sandwich and proceeded to order a bacon, egg, and extra sharp cheddar. I stopped to ask the nature of the hard roll and was told they were out of them. The woman behind the counter offered to put it on a section of Italian bread which sounded more than fine to me.

I took a seat in the dining area with other folks on our tour as the owner and chef, Casey Holenbeck, gave a short talk about the tragically named seasonal greens: ramps. When my sandwich arrived it looked respectable with its gooey cheese and overflowing bacon. I took a bite. The bacon was thick and salty, and just what I was looking for to counter cheesecake and chocolate for breakfast. The egg was a little hard but I didn't specify how I wanted it fried so no big deal, but the cheddar, oh man, the cheddar. I usually avoid ordering cheddar on egg sandwiches as diners tend to have the most flavorless cheddar on hand, but this was not that. Salty, creamy and sharp made this sandwich a cut above many. And the bread was good, too. Not sure if it was baked there (the sign near the deli counter says that everything is made in house) or if it was from Baker Street (they sell their loaves in the market area). Either way, firm but not tough, soft enough to eat a sandwich on but not flatten to nothing. This was a good egg sandwich.