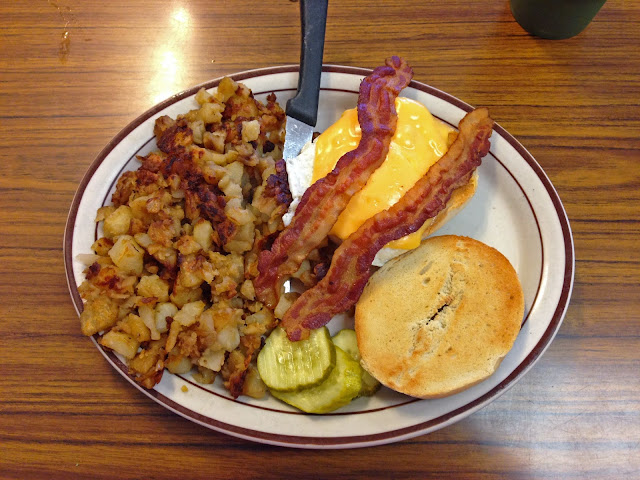 I dropped the kids off at school at 8 and the household sale around the corner wasn't open until 8:30. Might as well check out Tom's Restaurant in the plaza on the corner of Hudson and East Ridge.

I was pleasantly surprised that this storefront diner had some older fixtures - fabulous yellow counter, chrome stools, and booths that seemed oddly small compared to the amount of space between them and the counter. It was hard to imagine two grown-ups sitting comfortably side by side in these booths, but imagining them doing a tango in the middle of Tom's seemed reasonable. As it was just me, just sitting and eating, the booth size was just fine.

I didn't notice a breakfast sandwich on the menu so I asked if they made one. They did. I asked what my bread options were. The waitress listed the usual: hard roll, bagel, English muffin, or toast. Then she added: "The hard roll is the best." I held my tongue and told her I was more in the mood for a bagel. She asked how I wanted the egg and I told her over easy. She looked at me as though I asked her to hold the bagel between her knees.
"It's going to be messy."
"You've got napkins?" I smiled.
"No."
"I guess I'll just use my shirt."
She hinted a smile and then headed back behind the counter and gave the order to the cook. I could hear him respond: "As a sandwich?!"
"As a sandwich."

A moment later she swooped by my booth and put a short stack of napkins on the table.

I looked around admiring the sparseness but not charmlessness of the place. Clean and tidy except for the cascade of lottery scratch-offs between the soda machine and kitchen.

And then my food arrived. Half a platter of home fries and two very long, crisp strips of bacon leapt out at me, then I noticed the bit of green on the plate: Pickles. How jolly! I took it as a nod to spring and started to put the sandwich together. The outside of the bagel was oddly matte which made me question if it had ever met water but when I took a bite it wasn't the usual soft breadel; it had the chewiness of a real bagel and was well suited to a sandwich. And then a bit of yolk oozed out onto my finger. I imagined the staff peering from behind the counter waiting to see this very thing but I didn't turn around to check. I picked up a napkin and wiped my finger off and took another bite. No more oozing. The rest of the egg was firmer and was not the mess that was anticipated.

The waitress came back to ask how this bizarre order was. "Just perfect," I said.

The bacon was crisp and delicious, the egg wasn't overdone, and the bagel exceeded my expectations. The home fries were pretty good and oh so plentiful. As with the Avenue Diner, this ended up being over ten bucks with the potatoes and iced tea. Maybe next time I bring a dance partner to split the home fries with.