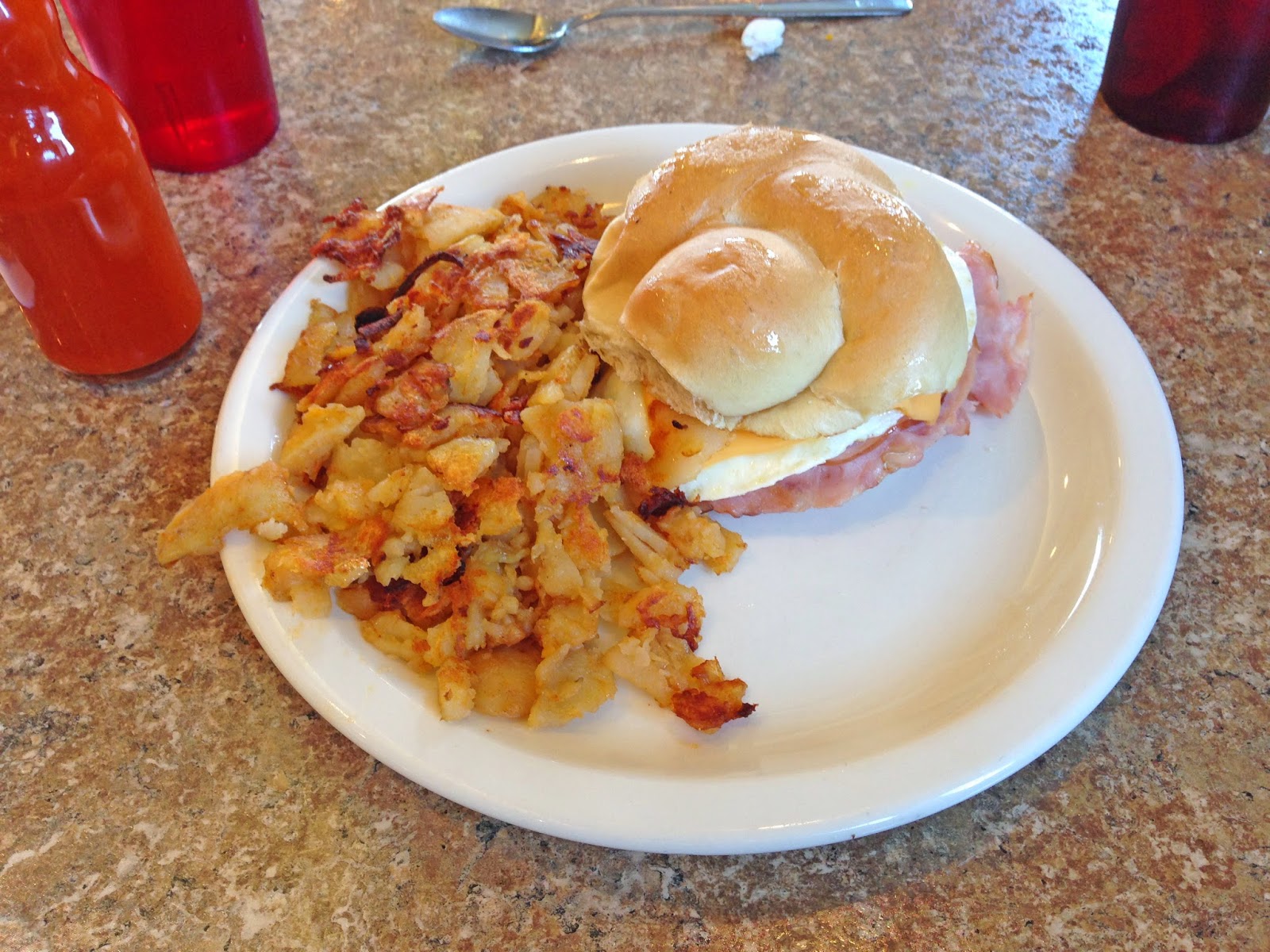 It was a lovely spring morning of errands and garage sales and an intense need for breakfast. I found myself near Monroe Ave and thought about the egg sandwich options nearby. Mark's Texas Hots is a late-night staple and that got me reminiscing about Gitsis further down the street. Well, reminisce may sound too fond; I remembered a few drunken visits there eating basic greasy-spoon fare in the wee hours surrounded by an incredible assortment of post-bar, post-club, post-prom revelers. While the people watching was great, the greasy, heavy atmosphere was not. I'm guessing they closed in 2013 after a shooting incident was the last straw in dealing with drunken after-hours crowds. In its place came The Avenue Diner so I decided to see what, if anything, had changed.

The whole place has been redone - clean, generic diner complete with cheery, non-descript art. New booths, benches, chairs and tables erased the dingy after hours feel of Gitsis. The sun shining in the windows didn't hurt, either. Sitting in my booth I had the odd sensation of being an out-of-towner, having breakfast in the familiar but foreign booth of any diner in any downtown.

The one listed breakfast sandwich was fried egg, ham, and cheese on a grilled hard roll.  I could have gotten it on a bagel or toast but I didn't feel like getting a breadel and hadn't had a hard roll in a while so I stuck with their suggestion. I hadn't really spoken to anyone yet so I'm pretty sure my very sweet and friendly waitress thought I was a little special.
"Can I get that egg a little sunny, a little runny?"
"You don't want it flipped?"
"No, flipped is fine, but still runny."
She raised an eyebrow, "You mean over-easy?"
"Ah yes, of course. I forgot about that one." I added some home fries and a tea and watched the early morning Monroe Avenue traffic for a short while.

The sandwich and heaping pile of potatoes arrived and I dug in. Home fries were good, crispy on top and bottom from the grill with occasional bits of crispy onion. Then I picked up the sandwich. It was hefty! A lot of ham, and although only one egg, it was quite full. I think you know what happens next...this was all too much for the Rochester hard roll to handle. A chunk of white fell out of one side, yolk oozed out the other onto the plate, and the roll smushed down to nothing. It tasted fine, it's just that the disappearing bread makes it a nuisance to eat; Half eaten like a sandwich, the other half with a fork off the plate.

I was full, the waitstaff was exceptionally friendly, the atmosphere was pleasant. My only real (new) complaint is that with home fries and an iced tea, this breakfast ended up costing $9, cutting into my garage sale singles.

The Avenue Diner
Sandwich cost: $3.35
Rating: Think of "average" as a compliment and there you have it.
Posted by Dan Buddy at 2:30 PM

Email ThisBlogThis!Share to TwitterShare to FacebookShare to Pinterest
Labels: "hard" roll, ham, it over until it's easy, keep on the sunny side or life, The Avenue Diner