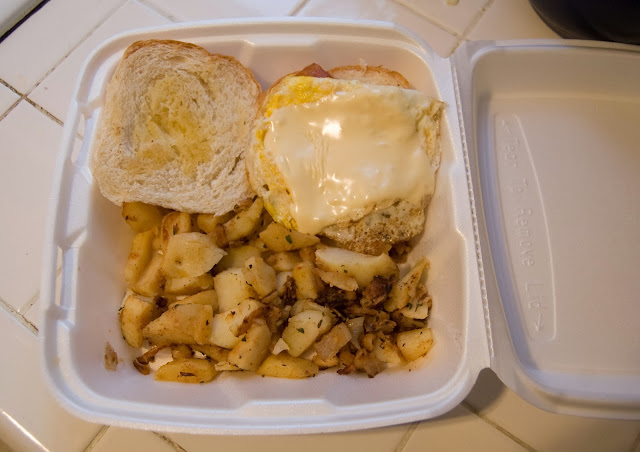 Monday. Shit, it's still only Monday. Every time the alarm goes off I think I'm gonna wake up on Friday. Sometimes I'd wake up and there'd be nothing. No eggs in the fridge, left the real hard rolls back downstate. When I was here I wanted to be there and when I was there all I could do was think of a way back to a diner. I've been here a while now, and every day I get hungrier.

It was Monday, Rochester, not Saigon, but I had gone to bed too late and gotten up too early to get the kids to school. I did have eggs (and even hard rolls in the freezer), but I wanted to get to work early and didn't feel like sleepily overcooking breakfast so I veered towards The Morningstar.

A large, open dining room makes for an unremarkable setting but the diner menu makes for a reliable neighborhood breakfast joint. The sparseness of the room is countered by the warmth of...oh, man, I've been going here for years and don't know the name of the woman who runs it. I do know that she calls me dear, brings me food, and is always a pleasure. Today was no different (though she seemed confused as this was probably the earliest I've ever been in there and I've never gotten something to go).

"Yes, dear?"
"Breakfast sandwich and home fries to go, please." She looked at me and tried to remember if this was my usual order and if so did I prefer ham, sausage or bacon. I don't think I've ever ordered a breakfast sandwich here before so I helped her out, "Bacon."

There was only one other person there so she and I chatted a minute about sleepy Monday mornings (though as she was at work at 7 and I had to be to work at 9 I was dragging far behind in chat).

Styrofoam container set to go and I'm gone. At home I slowly revealed the sandwich still open, melted cheese glistening in the morning light, hash browns at the ready. I picked up the top of the roll with its dab of butter and put it on top of the sandwich. Aaaaaaand we've got ourselves another Petrillo's hard roll. A momentary setback as the fried egg, though hard, was good, the white American cheese was gooey, the bacon had crisp and chewy ends, and the home fries, though not crisp in any way, were well seasoned and had plenty of onion.

Morningstar Greek American Restaurant
850 Merchants Road, Rochester, NY 14609
Sandwich cost: In my sleepiness I forgot to look at a menu. Next time.
Rating: It's a pretty classic breakfast sandwich