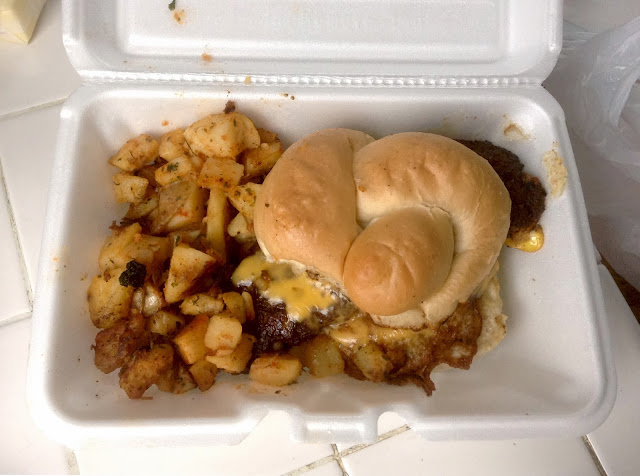 A dreary Saturday morning and I have no eggs, bread, or cereal in the house. Guess I have to go get an egg sandwich. James Brown's Place is about a mile from my house and actually was one of the tipping points in buying a house in this neighborhood. It's a blue collar foodie diner in the era of extreme eating. What does that mean?! You don't just get French toast you get cranberry-apple French toast or instead of just ordering a breakfast sandwich you choose from the menu of over twenty breakfast sandwiches.

The special sandwich this weekend was the Three Little Pigs: Grilled French Baguette topped with smoked pork, ham, bacon, a fried egg, chipotle mayo, and cheddar. This sounded like more than I was ready for first thing so I just went with a breakfast sandwich with andouille chicken sausage. Unfortunately they were out of the chicken andouille and offered turkey sausage instead. I ordered it to go with some home fries and a few minutes later headed home with my styrofoam container and stack of napkins.

The container managed to encapsulate the whole James Brown experience: kind of dark, a little messy, warm, and filling the air with the steamy smell of grease and grilled meat. The next thing I noticed was the frickin' Rochester hard roll. It seems that Petrillo's Bakery has cornered the market on restaurant rolls. Not to pick on them, but these dinner rolls just don't hold up in a greasy sandwich, especially one with a slab of sausage in it. Take a look below, the roll just condenses into nothing; The sausage is thicker than the roll! 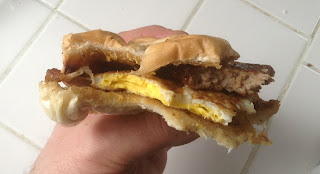 But this is also the problem with this sandwich. Instead of a breakfast sandwich with sausage this was pretty much a hunk of meat, albeit delicious meat, with some cheese, an egg, and bread surrounding it. It almost felt more like a job to finish it than a meal and on Saturday morning I don't want to go to work. The egg and cheese got lost in the fracas and the untoasted roll, as I mentioned, just buckled. I've been eating at James Brown's for over twelve years and I've rarely been disappointed, so this was a bit of a surprise. Even the home fries were off - cooked fine but lacking in seasoning, and I don't think I can blame the styrofoam for that.